We develop foot ulcers due to pressure and shear forces. If I was to prescribe you a two month vacation to the moon where there is less gravity, then you will heal your foot ulcer, but that would be financially impractical.  What we can do instead is put the pressure onto other parts of the foot, and that will then offload the foot ulcer. There are several devices we can use to do this, but the MOST EFFECTIVE device is one that you cannot take off. No matter how disciplined we are, wearing these things can be annoying and inconvenient, so if it is easy to remove, it will be removed. Then we would have to remember to put it back on every time we plan to take a step. A device that you cannot remove means you don’t have to think about it anymore, you only have to put up with it. 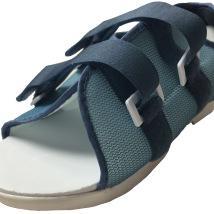 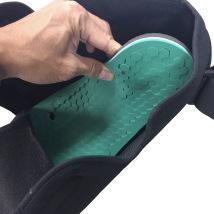 offloading shoe with removable insert
This is a flat sandal with Velcro straps. Some of these sandals have wedges on the bottom. Some come with inserts where you can pull out plugs to offload an area. For sandals without those inserts with plugs, we sometimes cut a hole out of the insert and glue it to the sandal. Shown here are some examples of such devices. There are many brands and versions of sandals and even shoes.

This consists of Webril and Coban. It looks like a cast but without the hard outer shell and does not go up the leg. It is basically a soft bulky dressing.  Typically it also requires use of a surgical shoe or cast shoe for protection of the dressing.

Also called a CAM boot (short for controlled ankle motion) or fracture boot (it is sturdy enough to treat a lot of foot and ankle fractures). This is a rigid device that goes over your foot, ankle, and leg. Some doctors wrap the boot in zip ties or cast material to make it difficult to remove. Some boots come with inserts that have plugs that you can remove to offload the ulcer. 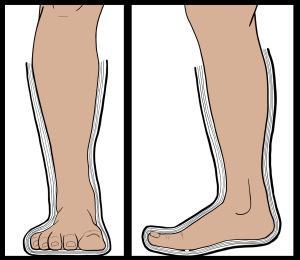 Just like a regular cast for broken bones where we use fiberglass or plaster of Paris, a total contact cast is the same, only more time is spent molding the cast material to conform to the shape of the foot and leg.

How These Devices Work

It is the combination of pressure and shear that causes diabetic foot ulcers. The pressure comes from the weight of our bodies. The wearable device that does this the best is the total contact cast (as shown in the animation above), because the skin contact allows some weight to be distributed to the the cast. There is still some weight that goes through the foot even with the cast, so we still have to remove shear.

See how this foot is rubbing against the sole of a shoe. The skin is going to get a lot of friction. The more layers there are between the foot and the ground, the less friction goes to the skin. The friction will instead go into those layers.

There are a lot of brands and different types of shoes, boots, and casts. Doctors that have cast technicians on their staff are more likely to use total contact casts. Others stick with what they are used to and have found success with. Each device have their pros and cons, and there isn’t really a right or wrong device. As long as your ulcer is healing, you know that it’s working.

Literature reviews of the medical evidence currently suggests that total contact casting is considered gold standard. It does the best job at offloading pressure and shear, but casts may not be for everybody. It could cause problems like skin abrasions and pain in the knee or hip from walking unbalanced, which increases risk for falling. It may also be intolerable to people who are claustrophobic. Personally, I like using the football dressing because it doesn’t have the problems associated with casts. The dressing is easier for people to get around with, and it works. It is a new treatment, so it is not well studied. Also, the football dressing is only good for foot ulcers on the front of the foot, not the heel.

How long do I have to wear this thing?

You can change the type of device throughout the treatment but you’d have to wear something until the ulcer heals. The healing time depends on how big the ulcer is, how good the blood flow is, and how active you are, but a rough estimate would be 2 to 6 months. Wearing a boot or a cast for weeks can cause some knee, hip, or back pain because boots and casts makes one leg longer than the other. The pain goes away once treatment is over. For these aches and pains, I recommend getting an Even-up shoe balancer. To my knowledge, insurance does not cover this, but since you will have a longer leg for 2 to 6 months, it is worth the investment.

Can I use a knee scooter?

If you can heal your foot ulcer without having to use a knee scooter, that would be best. However, if you are quite active such as during work or school, and have trouble healing your ulcer because of it, then using the knee scooter may be a good idea. Also, if you know you will be walking a lot during an upcoming trip, then it’s a good idea to use it. Some insurance covers it, so call early. They may require a letter of medical necessity from your doctor. If it’s not covered, you can buy it in a department store or online.

Another great device that is hands free is the iWalk. It looks like a pirate leg, or a combination of a knee scooter and crutch. Some of my patients with foot wounds who like to do a lot of work around the house like using the iWalk over the scooter. 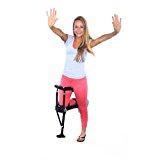 What if my ulcer is not healing?

Foot ulcers are difficult to heal, and sometimes just an offloading device alone is not enough. For those problematic ulcers, surgical treatment in addition to offloading may be required. Not one treatment works for everybody, and there are so many factors that go into healing. If it isn’t healing after what seems like you’ve tried everything, a second opinion may be helpful.