This man came into the hospital with a wound on his right foot with some swelling and redness. His x-ray did not show evidence of bone infection or gas. An MRI was ordered which showed a bit of swelling in the muscles and skin, no abscess or bone infection. He was awake and talking pleasantly. At first glance, the clinical picture and physical exam does not seem very concerning. It is not wet gangrene, there is no abscess, there is no bone infection, and he is not in septic shock.

After examining his foot however, I’ve noticed a few things to raise concern. First, the wound on the bottom of his foot is not typically a location of bony prominence, so it’s not a diabetic foot ulcer due to pressure and friction. Secondly, when wounds are black like this, it is either from bad blood flow, or infection, sometimes both. In his case, he has good pulses in his feet, and does not have symptoms to suggest poor circulation. Additionally, gangrene from bad circulation usually starts at the tips of toes, so this would be a very very unusual location for gangrene to start.

The redness is on the top of the foot and not the bottom, which means if this is infection, it has spread from the bottom, gone all the way through muscles, ligaments and tendons, between the knuckles bones of the foot, and is now involving the top of the foot. When I press on the redness, it does not disappear under my fingers (non-blanching erythema). Usually redness from a regular skin infection (cellulitis) is from swollen blood vessels that will disappear when pressed. In this case, it means that the infection has broken the microscopic blood vessels (capillaries) causing blood to leak out of the vessels, similar to a bruise.

I decided to give it a few hours to see if IV broad-spectrum antibiotics will improve his infection. Unfortunately, the infection appears to be getting worse. This gave me the answer I needed to confirm my suspicion of a necrotizing soft tissue infection, also known as type I necrotizing fasciitis [1]. He is at risk for losing his foot if the infection is not controlled, so he was brought into the OR immediately with the possibility of having to amputate all of his toes.

As soon as I opened up his foot, it was obvious that surgery was the right call. He had a deep infection that liquefied the tissue around the second toe. Luckily it had not spread to the other toes so I only had to remove one toe. He was left with a large open wound to let the infection drain for a few days, and brought back to the OR a second time for more cleaning and then sutures. A pathologist confirmed the diagnosis of necrotizing fasciitis. The wound was too large to close completely, so part of it will have to heal on its own for a little while until it’s ready for a skin graft.

During the healing process, unfortunately, this man developed another infection. The toe quickly turned black in the course of a day. At this point, I felt that it was not feasible to try to save the remainder of the toes by trying to heal a large wound because I was afraid he would keep getting infections. We decided on a transmetatarsal amputation, where we removed all of the toes and their knuckles. We also discovered a small blockage in one of his arteries and a vascular surgeon was consulted and was able to treat it with a stent. The wound eventually went on to heal and he is able to walk in regular shoes now. 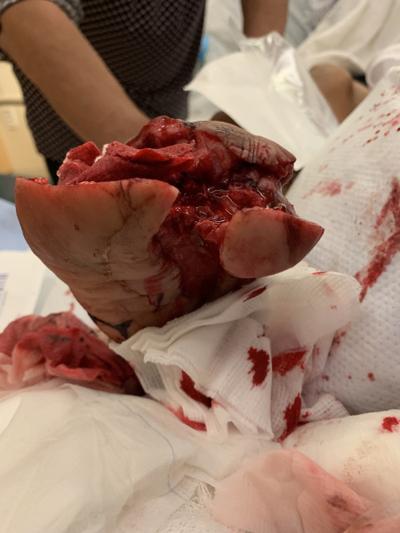